MURRAY, Utah, April 25, 2019 (Gephardt Daily) — A Murray family lost its house and its dog in an afternoon blaze on Thursday.

The parents and children were not home when fire officials were called 630 W. Clover Crest Drive at about 1:30 p.m. Thursday, assistant Murray fire chief Chad Pascua said at the scene.

Crews arrived to find smoke and fire coming from the roof and the rear of the house, Pascua said.

“Fortunately, nobody was home,” he said, adding that unfortunately, the family dog was found inside, deceased.

“Unfortunately, it looks like a total loss,” Pascua said of the single-family residence. Since no one had been home for hours, it’s likely the fire had smouldered for some time before billowing smoke made it obvious, he said.

The cause of the two-alarm fire was still being investigated by mid-afternoon on Thursday. Pascua said the Red Cross would offer the family assistance if they had no family to stay with. 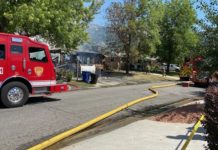