NORTHERN UTAH, Dec. 15, 2019 (Gephardt Daily) — Wintry weather is closing in on the northern part of the state, and drivers are advised to be ready for slick roads and lake effect snow.

Interstate 15 southbound at Lehi is closed due to black ice late Sunday night, and drivers are advised to use an alternate route, Utah Highway Patrol tweeted. The lanes are expected to reopen by midnight, but caution is still advised.

The National Weather Service says lake effect snow is expected throughout the night into the morning commute in the Salt Lake and Tooele valleys, so drivers are asked to allow extra travel time when they head out in the morning. Think “winter driving conditions,” slow down, and arrive at your destination safely.

A hazardous weather outlook has been posted by NWS for the western two-thirds of Utah and southwest Wyoming. Highway Patrol troopers in both states have been dealing with slide offs in the canyons since early Sunday evening, and they’ve been reminding drivers that the roads are extremely slick, especially in the canyons.

According to NWS, “A few snow showers can be expected across portions of northern and central Utah (Sunday night). The heaviest snow will be near lake-effect snow impacting mainly the western Salt Lake Valley west to the Tooele Valley. 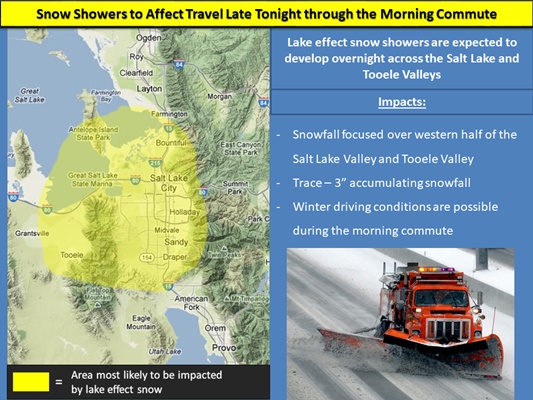 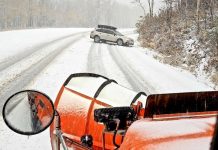