A series of thunderstorm pounded the Kanab area with the sudden runoff leading to widespread street flooding late Wednesday afternoon.

Several homes were damaged by the rising water, but there we no reports of injuries.

The National Weather Service in Salt Lake City has issued a series of flash flood watches and warnings across much of southern Utah, most of which were expected to remain in effect until midnight. 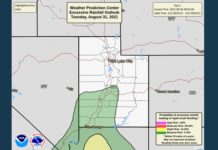