At 4:45 p.m., the district tweeted the fire has now burned approximately 60 acres and four structures have been evacuated but none are in immediate danger.

“Fire crews are taking extreme precautions and working diligently to control the fire,” the tweet said.

There have been no injuries as a result of the incident. 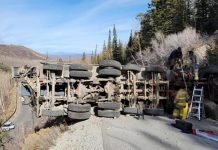