EAGLE MOUNTAIN, Utah, May 3, 2022 (Gephardt Daily) — The Utah County Sheriff’s Office has released the name of the man arrested after a car driving an estimated 100 mph ran through a corral and instantly killed two 3-year-old boys playing in the enclosed area.

The man arrested is 25-year-old Kent Cody Barlow, of Eagle Mountain, a convicted felon who was on parole after a 2021 conviction for which he was sentenced to five years or less in state prison.

Utah County Sheriff officers were dispatched Monday at about 7:20 p.m. to the scene, at Cedar Valley Stables in the south end Eagle Mountain, the UCSO statement says.

“The report was that a car rolled into a horse stable. When the first Deputy arrived at the scene he confirmed what callers already told dispatch, that two young boys were dead.

“Witnesses told Deputies they saw the car driving recklessly, weaving or drifting into oncoming traffic, traveling near or faster than 100 MPH, and running a stop sign immediately before crashing. The car went off the paved road to the right, shattered a vinyl rail fence, smashed through a five rail steel pole fence, smashed through another section of that same steel pole fence, then crashed through a fence panel corral, then hit a large cement block anchored in the ground, launched into the air, and then into a lean-to style set of horse stables, coming to a stop upside down. Passengers in the car told deputies Barlow was traveling 80-100 mph and was ‘drifting’ (sliding the car) as he drove.”

The car crashed through the corral fence and hit the two boys, running over them and leaving their bodies 75 feet from where they were playing, the statement says. From where the car first left the pavement, to where it came to rest, was about 345 feet, the UCSO said.

During the investigation deputies and detectives found evidence that the driver was impaired. A preliminary drug screen was positive for methamphetamine. The evidence of drug use, combined with the driving pattern reported by witnesses and passengers, is consistent with impairment.

Barlow was booked into jail on the following initial charges:

See images from the Monday evening incident immediately below:

Barlow is also currently on parole with the Utah Department of Adult Probation & Parole (AP&P). Agents with AP&P have also placed a hold on Barlow pending a possible parole violation.

“We of the Utah County Sheriff’s Office express our sincerest condolences to the family and friends of these two sweet boys,” the Sheriff’s statement says. “Their loss is a senseless tragedy and we can only imagine the depth of the grief now being carried by their families. Our prayers are with them as they walk this incredibly difficult path.”

Those charges stemmed from a 2019 incident in which Barlow, then a parole fugitive, fled a traffic stop on the stolen motorcycle, resisted arrest, then stole a Draper Police vehicle to escape again, according to court documents. The statements say Barlow crashed through fences and mail boxes before being recaptured.

See images from the 2019 incident below: 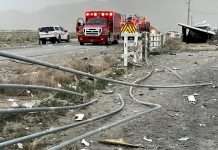