TOOELE COUNTY, Utah, June 5, 2020 (Gephardt Daily) — A new brushfire broke out Friday night on Stansbury Island in Tooele County, where a 13,000-acre fire that started almost a week ago was finally 100% contained on Wednesday.

This new fire was estimated at 100 acres at 10:30 p.m. and is as yet unnamed, according to a Utah Fire Info tweet.

The Tabby Canyon Fire, which started last Saturday, May 30, was human-caused and was ignited by an exploding target, Utah Fire Info tweeted the next day.

Strong winds were a challenge for firefighters working to get the Tabby Canyon Fire under control. 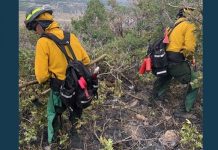 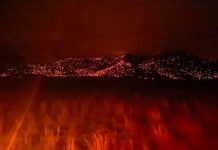