Lt. David Crouse, spokesman for Washington County Sheriff’s Office, said that on Feb. 12, residents in New Harmony reported seeing a dead horse on Prisbrey’s property and neither he nor the tenants, Trinity or Silvers, had yet properly disposed of the animal.

Officials told the three to dispose of the animal and left without further incident, Crouse said.

Police were subsequently called back to the home due to a civil matter. When officials arrived, they found that the horse was still not buried. In addition, two other horses were dead and buried inside a corral on the property.

A fourth horse was found alive but severely emaciated, and was taken to Dust Devil Ranch Sanctuary for Horses in Cedar City.

Crouse said the suspects indicated that they didn’t have enough money for food and they thought the horses died of starvation and possibly cold weather.

Silvers has been released from custody since the incident, and both Prisbrey and Trinity remain in jail.

For more information about the Dust Devil Ranch Sanctuary for horses, click here. 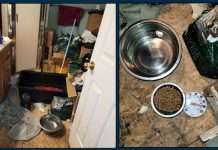