Hailey Keele pleaded guilty in a federal court last week to one count of mail fraud and one count of tax evasion.

Keele admitted that between July of 2006 and November of 2014, she prepared checks from her employer’s bank account to be signed by the company’s business manager, according to a news release from the U.S. Attorney’s Office, Utah District.

The name of her employer was not given.

Keele reportedly admitted she used the funds to pay for personal expenses, to cover cash advances, and to get credit-balance refund checks from American Express. One credit-refund check she received, in August 2012, was for $36,681.15.

Keele also did not pay taxes on the unreported income.

Keele’s sentencing is set for Feb. 21 of 2018. She faces as many as 20 years in jail on the fraud charge, and as much as five years on the tax evasion charge.

She also agreed to forfeit all property acquired or traceable to her criminal conduct. 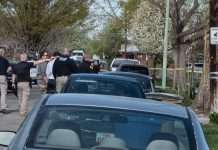