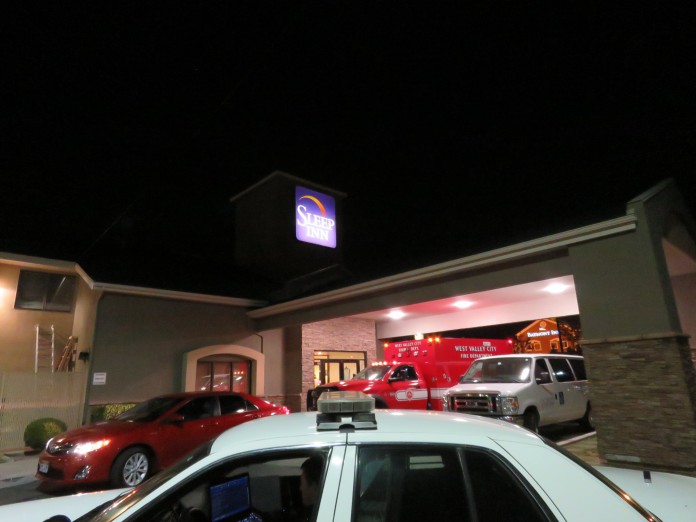 WEST VALLEY CITY, Utah, Nov. 24, 2015 (Gephardt Daily) — Three men have now been charged in connection with an Oct. 21 incident during which guns were pointed at several people near a West Valley City Sleep Inn, then a gun was fired nearby in what police say was a plot to draw attention away from the original investigation.

Marco Etsitty, 31, was charged Thursday in Third District Court with being the gunman who fired at police. The West Valley City man was charged with one count of possession of a firearm by a restricted person, five counts of discharge of a firearm, and one count of obstructing justice. Each charge is a second-degree felony.

According to Etsitty’s warrant of arrest, West Valley Police officers were waiting for a warrant to search a room at the Sleep Inn, at 3440 Decker Lake Drive, after reports that one or more gunman who had been threatening people were inside. Officers then heard six shots coming from the I-215 on ramp, aimed at them. No one was injured.

When police entered the room, they found Al-Bander and Movahhed, and two other men in the room, and three handguns.

After receiving written consent to search the cell phones of Al-Bander and Etsitty, officers found text messages between phones, with Al-Bander asking for a distraction “so that their attention is drawn.” Etsitty said that he did not have a gun, but Al-Bander told officers the shooter was Etsitty.

In connection with the Sleep Inn shooting, Movahhed was also charged in October with one count of possession of a firearm by a restricted person, five counts of aggravated assault, a third-degree felony, and threatening to use a dangerous weapon in a fight, a class-A misdemeanor. Al-Bander and Ruben Rocha, 33, were listed as Movahhed’s codefendents.

Rocha is accused of selling Etsitty the weapon used in the shooting at the hotel.

Wounded Hunter High student defies the odds, out of ICU, on ‘long road’ to recovery; family thanks community for love, support