OREM, Utah, March 3, 2020 (Gephardt Daily) — An Orem man is facing multiple felony charges after officers found “mass” quantities of drugs in his home after he allegedly broke into his former workplace multiple times.

A probable cause statement from Utah County said Richard Scott Carlson, 40, was initially facing charges of:

The officer responded to the Vivint training facility at 491 S. 1325 West in Orem Saturday, the statement said.

The manager at the property reported the alarm system was activated, and the surveillance camera showed a man enter the building. The manager told officers he recognized the suspect as a former employee, identified as Carlson.

“The manager told officers Carlson was fired from Vivint approximately a year ago, and was not authorized or allowed to be in the building,” the statement said. “He stated they have had continuous issues with Carlson entering the Vivint building unlawfully since his termination. He stated Carlson has taken several items belonging to Vivint and has disabled the security systems to access the facility.”

The manager said Friday, he entered the Vivint training building after hours, and located Carlson and another unknown individual inside the building. Upon making contact with the two individuals, they ran out of the building. After that incident, the manager stated they installed new security cameras inside and outside the building realizing the original system had been compromised and disconnected. Those cameras were able to capture footage of Carlson entering the building Sunday.

The officer reviewed the surveillance footage from Sunday and observed a black BMW sedan pull up to the entry door. The man who got out of the car matched the description of Carlson.

“Carlson walked up to the door and appeared to use some sort of access key on the door, causing the door to beep and unlock,” the statement said. “Carlson entered the building and went straight to a locked closet door. Carlson attempted to enter in a code to the door several times, but was unsuccessful in entering the room.

Carlson was located at his residence in Orem soon after. The suspect was detained and read his Miranda rights. He then allegedly told officers he had been going over to the Vivint training building since his termination at least twice a month.

“Carlson stated he was going over there to take soda,” the statement said. “Carlson also advised he had ‘borrowed’ without permission a popcorn machine several months ago, after he was terminated from employment.”

After completing the investigation, Carlson was transported to the Utah County Jail.

A second probable cause statement for Carlson said during the investigation for the case related to the burglary and theft charges, officers obtained additional information regarding additional stolen property inside his residence.

A search warrant was requested and approved, and served on Sunday at Carlson’s residence.

Large amounts of money, buyer lists, receipts, and transaction information were located containing information of who Carlson was selling to. Scales, packaging and distribution supplies were also found, the statement said.

All drugs and paraphernalia were located in Carlson’s locked master bedroom and master bathroom, the statement said. Vivint equipment was found stored throughout the residence.

“During the search, a 9 mm Ruger handgun was found in the master bedroom closet, where the majority of illicit substances and cultivation kits were located,” the statement said. “Several rifles and ammunition were located in a locked closet in the basement.”

Carlson is facing additional charges of: 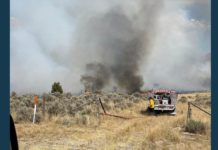