COTTONWOOD HEIGHTS, Utah, April 26, 2019 (Gephardt Daily) — A hazardous material crew was called in Friday after students on a bus outside Butler Middle School were exposed to an unknown material.

The incident happened at about 3:20 p.m., Haney said. According to police radio transmissions, at least eight students were on the bus.

Lt. Dan Bartlett, Cottonwood Heights Police Department, said only one student had been treated so far, and the incident involved one student throwing powder into the eyes of another.

Bartlett said the material thrown “was base, not acid,” so was unlikely to do any damage beyond eye irritation.

“It was kids being kids,” he said, adding that it had not yet been determined if charges would be filed. 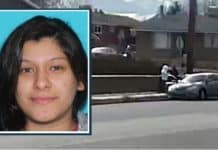