PROVO, Utah, Feb. 20, 2021 (Gephardt Daily) — A woman who died after an Interstate 15 collision Wednesday morning in Provo has been identified.

The victim was 23-year-old Makenna Goodwin of Saratoga Springs, a statement from the Utah Department of Public Safety says.

Goodwin was alone in her Toyota Corolla at about 8:50 a.m., approaching milepost 264, a statement from the Utah Highway Patrol says.

“For an unknown reason, the driver drifted into the right shoulder barrier. After hitting the barrier, the Corolla slid back into oncoming traffic and was hit by an approaching semi in a T-bone style collision,” the UHP statement says.

The woman “was transported to a hospital where she remains in critical condition due to the injuries she sustained in the collision with the semi,” the statement says.

A GoFundMe account has been established to help pay Goodwin’s medical bills and funeral expenses. 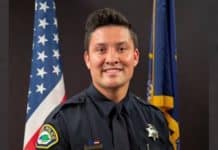