“At 11:30 p.m., Richfield dispatch received multiple 911 calls of a wrong-way vehicle on I-15 near mile marker 228, north Nephi exit,” said a news release from the Utah Department of Public Safety. “The vehicle was traveling north in the southbound travel lane. Trooper Geoffrey Hall responded to the area and located a minivan facing the wrong way near mile marker 232; it was stopped on the edge of the southbound travel lane in the median.”

Hall could see several cars traveling south and moved ahead of the van to try and warn oncoming cars, the news release said. The van passed the Mona exit and continued the wrong way.

“Trooper Hall went to the next cross over at mile marker 234, recognizing the threat to the public, and at 11:48 p.m. he pulled into the median and rammed the van when it approached,” the news release said. “The front of Trooper Hall’s patrol car impacted the front right of the minivan. The van was pushed off the roadway near the freeway fence.”

Officers from Nephi Police Department and Juab County Sheriff’s Office arrived on the scene seconds after and placed the driver, later identified as Cory Roy White, 43, into custody without incident.

Hall was uninjured in the crash; his car sustained major damage and all the airbags deployed, the news release said. White had some minor abrasions from flying debris during the collision. Both Hall and White were checked out by medical personnel on scene.

Below is a video of Hall’s ramming the wrong way vehicle and a clip from the trooper’s dash-cam showing the large amount of traffic that was southbound during the incident.

A probable cause statement from the 4th District Court of Juab County said White is facing charges of:

The driver allegedly smelled strongly of alcohol, and when the vehicle was searched, an open container was found in the center console cup holder, the statement said. There was alcohol “sprayed all over the van, and was on the driver’s sweatshirt due to the crash,” the statement said. After the driver was checked out by medical staff, he requested that he be transported to the hospital for further evaluation.

A preliminary blood test showed negative for alcohol; a urine test showed positive for methamphetamine. The driver said that this will possibly be his third DUI, the statement said.

White was transported to Juab County Jail, where he’s being held without bail. He was on parole at the time of incident. 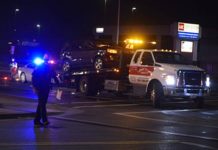