SOUTH JORDAN, Utah, July 24, 2020 (Gephardt Daily) — A South Jordan man is being held without bail after a SWAT response to his home led to the filing of 26 charges against him, including 23 felonies.

The investigation leading to the Thursday night response began the previous week when a fast food business on South Jordan Parkway reported threats allegedly made by McManigal by texts.

“After the time these shots fired were reported, Ryan made a comment on Facebook that he had shot out a street light,” the probable cause statement says. “An area check in the area of 10365 S. River Height Drive a Street Light was found to be broken.”

“Our investigative team started monitoring some of his stuff and we realized he’s a pretty dangerous guy, so we did some additional investigation over the next several days,” Pennington said. “That culminated tonight with us coming out here with a search warrant for his residence to retrieve some weapons from him that he’s not supposed to have” as a restricted person.

SWAT teams were called in to the area of the 3300 west block of Snow Moon Place, where McManigal lives. They had a warrant to search his house.

“When negotiations started with him, he immediately became confrontational,” Pennington told reporters who were kept a safe distance from the scene.

“Right after negotiations start, he shuts down negotiations and starts ringing off shots,” Pennington said. “Luckily, we had an idea that that may be the case coming in and so we had a very solid plan, and with a lot of armor and resources from our neighboring agencies, and thank heavens no officers injured tonight, and that guy wasn’t injured either. He ends up giving up, we take him into custody, safely.”

“Ryan admitted to shooting his gun towards police until his gun jammed, so he surrendered.”

Pennington said HAZMAT teams were brought in to process the residence. As of late Friday morning, more than a dozen houses and several businesses were still under evacuation orders as the HAZMAT investigation continued.

Pennington said Friday morning that the decision to serve the warrant with the assistance of armor-protected officers and vehicles was made after officials learned of his arsenal of weapons.

“… we decided it’s time to go deal with this guy and make sure he doesn’t have the means to carry any of this out. Seems like he definitely had the means.” 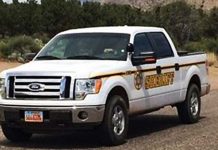 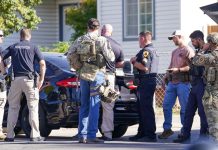 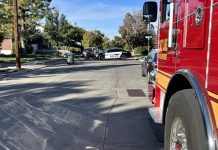 Suspect in custody after SWAT response to Sugarhouse neighborhood