NAVAJO COUNTY, Arizona, Sept. 12, 2019 (Gephardt Daily) — Sixteen days after married murder suspects Blane and Susan Barksdale escaped from custody in Blanding, Utah, a tipster gave investigators an idea of a good place to look for the couple, wanted after the death of a Tucson resident.

Van Bayless, assistant chief deputy of the U.S. Marshals, District of Arizona, said the numerous law enforcement agencies that had been working for days, nearly around the clock, rallied to get officers together to send to the remote location, near Payson, Arizona.

“We quickly got on the phone with the sheriffs and their chief deputies, and were able to amass about 50 people pretty quickly,” Bayless said.

Air surveillance happened first, to assess the area and clear any innocent bystanders. Next, officers surrounded the residence in question, and a bright spotlight was pointed at the house.

“The homeowner came out, confirmed both were inside,” Bayless said.

“He was pretty cooperative for a while, until he got about 15 feet from one of my arrest contact teams, and he became verbally abusive,” Bayless said. “He also made some aggressive movement toward individuals. They simultaneously used less-than-lethal devices, one being a Taser and one being a beanbag round. Blane went down pretty quickly.

“While he was still under the power of the Tasing, the officers moved in fast. They handcuffed him. They helped him to his feet, they brought him over to a vehicle.”

Blane Barksdale was checked out by someone with medical training, Bayless said, and Blane “became fully cooperative pretty quickly. He realized that he didn’t choose wisely with his actions, and he ended up talking to us a little bit.”

As Bayless finished talking to Barksdale for the night and left the jail, the former fugitive made a comment.

“He the told a trooper and myself, ‘Be safe out there. It’s dangerous,” Bayless recalled. “And I thought that was pretty interesting as we’d been working 16 hours around the clock looking for him, and a lot of other folks had gone to jail because of their flight, as we were working through leads and tips.”

The Barksdales had lots of help evading police, FBI agents and U.S. Marshals since their escape, Bayless said. At least three or four of those “helpers” are expected to face serious criminal charges. People gave the couple shelter and food, and the Barksdales were found wearing fresh clothing, he said.

But it’s a good operation when everyone gets to go home safe, Bayless said, adding that even the Barksdales got to go “home” safe.

The Barksdales were taken into custody Wednesday night, nearly 300 miles from where they escaped on Aug. 26.

The husband and wife were being extradited on murder charges from New York to Arizona when they overpowered two guards after faking a stomach illness. It happened after they left the San Juan County Jail in Blanding, where they had been housed the night before.

The Barksdales’ arrest comes just 48 hours after Blane was placed on the U.S. Marshals 15 Most Wanted list.

Bayless said Blane Barksdale had told officers some interesting stories about their time “underground,” as they evaded capture, but that investigators would be confirming the facts for themselves. 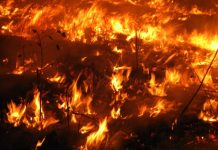