At 1:34 a.m., crews were dispatched to the structure fire near 20th Street and Orchard Avenue. Officials found a two-floor, four-unit apartment building with smoke coming from a unit on the bottom floor. All four units were evacuated.

“Firefighters worked to extinguish the fire and contained the fire to the original bottom apartment,” a statement from Ogden City Fire says.

“One occupant was displaced due to the damage to the apartment and is receiving assistance from Red Cross, the other tenants were allowed back into the building as their units were not damaged.”

Firefighters from the two cities responded with two ladder trucks, two engines, an ambulance, a paramedic unit, a battalion chief and 17 firefighters.

“The Fire Marshal’s office is on the scene investigating to determine the cause,” the statement says. “The building has been secured and has an estimated $7,500 in damage.” 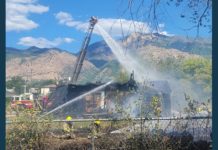 Fire in abandoned structure in Ogden causes $250K in damages