OGDEN, Utah, July 10, 2018 (Gephardt Daily) — A man in his late 60s is dead after an auto-pedestrian crash in Ogden early Tuesday morning.

Ogden Police Department Lt. Brian Eynon told Gephardt Daily the pedestrian was walking westbound across Wall Avenue at 25th Street around 5:55 a.m. when a gold Honda Civic struck him in the intersection.

It appears at this time the pedestrian was in a crosswalk; it’s not clear whether he had the right of way.

The man was pronounced deceased on scene.

Eynon said the man’s identity has not been released pending notification of family members.

Nobody in the Honda was injured, Eynon added.

Officials said the occupants of the Honda remained on scene and are cooperating with police.

The Utah Department of Transportation tweeted southbound lanes were closed in the area of the crash and the left northbound lane was also closed, but all lanes have since reopened. 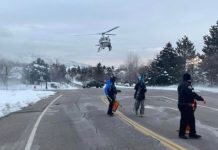