OGDEN, Utah, July 20, 2018 (Gephardt Daily) — Police are investigating what they are calling a suspicious death Friday night near 24th Street and Madison Avenue.

Ogden Police Lt. Chris Kovalsky said, “We were called out to the scene today at about 4 o’clock. We found a body of a deceased child. As (part of) our standard investigative procedures, we investigate every child death as suspicious, so we’re investigating that.”

When asked about the child’s age and gender, Kovalsky said the child was younger than five years old, “but I honestly don’t know the sex of the child.”

Crime Scene Investigation personnel were still working the scene several hours later, carrying out what appeared to be bags of evidence.

“Nobody is in custody,” Kovalsky told Gephardt Daily. “We are doing interviews with people, procedural interviews.”

He declined to share any details as to who is being questioned, nor did he say whether the exact cause of the child’s death is known.

Police are hoping someone in the community may have seen or heard something that will aid in their investigation.

This is the third time in a less than a week that Ogden officers have responded to a call of a suspicious death.

On Sunday, the body of Hilary Halliday, 41, was found in a canal in the area of 1000 West and 600 North, in Ogden’s Business Depot. Halliday had been missing since June 26.

The body was transported to the Medical Examiner’s office to determine the cause of death. The case is still under investigation.

On Monday morning, the body of David Marvin Paulson, 74, was found in an alley in the area of 2610 Monroe Blvd. 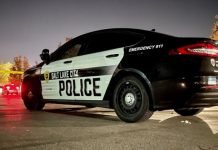