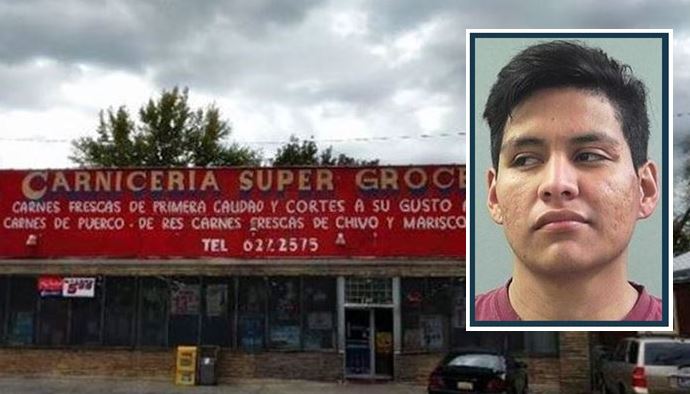 OGDEN, Utah, May 24, 2019 (Gephardt Daily) — Ogden Police officials have confirmed the name of a man shot and killed just before midnight on Saturday.

Arrested early Sunday, May 19, was Everardo Guadarrama-Garcia, 24, who faces charges of:

Guadarrama-Garcia is being held without bail in Weber County Jail.

The address police responded to was that of a small grocery store, but the shooting had nothing to do with an attempted robbery or anything to do with the shop, Eynon said.

“It was mano a mano,” he said, adding that police were not ready to release additional details in the investigation. Eynon did say that the two men were acquaintances at the very least.

The probable cause statement said that On Saturday, at three minutes before midnight, officers responded to Super Groceries, 511 E. 31st St., Ogden, on a report of a gunshot wound.

“Officers arrived on scene and located a Hispanic male deceased in front of the store,” the statement said. “There were spent .45 caliber shell casings located near the victim’s body.”

The victim, now identified as Hernandez, was shot three times, the probable cause statement said.

Officers responded to an address in Adams Avenue where a witness saw the alleged suspect run to after the shooting. The witness described the suspect as wearing black pants, a black sports jacket with gold stripes and a white baseball cap.

Officers surrounded the house and called the occupants out of the residence. The homeowner came out first and stated the man was in the basement.

A person matching the description given by the witness exited the basement of the residence and was identified as Everardo Guadarrama-Garcia, the statement said.

When asked who he had killed, Everardo stated, “Mauricio.” The conversation was translated by a Spanish speaking officer on scene.

“Under a Miranda interview, Everardo confessed to shooting the victim,” the statement said. “Everardo also stated that he hid the gun in the ceiling in the common area of his apartment where the drywall was cut out. Officers on scene did locate a .45 caliber handgun hidden in the ceiling just as he described.”

Guadarrama-Garcia also told officers that he had smoked methamphetamine earlier in the evening, and paraphernalia was observed in his apartment.

After shooting and killing the victim, Guadarrama-Garcia ran toward a vehicle with a female inside, the police statement said.

“There was another male who had arrived with the victim standing outside the vehicle,” it said.

“Everardo pointed his gun at the male and the car. The vehicle left the scene and the male ran away on foot. Everardo admitted that he pointed the gun at the male because he thought the male may do something in response to the shooting.”