SARATOGA SPRINGS, UTAH – September 29, 2015 (Gephardt Daily) – One person was killed and others injured in a multi-car accident in Saratoga Springs Tuesday morning.

SR 73 from Redwood Road to Pioneer Crossing was closed following the accident. Emergency crews were called to the scene at 600 West Crossroads Boulevard just after 6 a.m.

Officials said Katie Nielson, 29, was driving westbound when she crossed the center line and hit another car which killed Lillian Strickland, 72, of Cedar Fort. Nielson then went on to hit a third car giving the people inside minor injuries.

The cause of the accident is still under investigation. We will have more on this developing story as it becomes available. 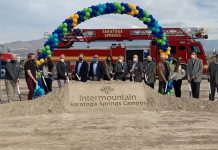