LAYTON, Utah, Sept. 20, 2022 (Gephardt Daily) — A 16-year-old Layton High School student is in police custody and a 15-year-old stabbing victim is in the hospital after two groups left the school early Tuesday afternoon to fight in a nearby park.

The alleged assault led to a lockout at Layton High School, as well as Davis Junior High and Crestview Elementary.

Layton City Police Lt. Travis Lyman told Gephardt Daily that two groups of students left for Layton Commons Park after an argument, and “several kids started to fight. Two of them in particular were fighting, and one of those two kids stabbed the other one in the upper abdomen with what we assume was a knife.”

The weapon has not yet been recovered, Lyman said.

“The suspect ended up running from the scene, but we have since captured him in an apartment where he lives.”

The juvenile suspect is being questioned by police, while the 15-year-old victim was transported to McKay Dee Hospital in stable condition, the Lieutenant added. The 15-year old’s injuries are not believed to be life threatening.

The three schools were placed on lockout after the incident, which happened at about 12:30 p.m., Lyman said. The lockouts were lifted after the alleged suspect was taken into custody.

As for how many people were fighting, “we are still sorting through all that,” Lyman said. “But there were a bunch of witnesses. Some kids recorded it on their phones. There’s a lot of evidence to go through and collect, but we’re doing that now.”

Lyman said the fight is not believed to be gang related.

“It was just two groups of kids who didn’t get along, for whatever reason.” 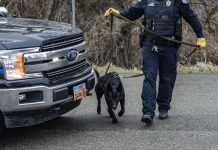 2 suspects arrested after carjacking of elderly couple in Millcreek