OREM, Utah, May 15, 2016 (Gephardt Daily) — An Orem man was arrested after a five-hour standoff with police after allegedly assaulting several friends and family members Sunday afternoon.

Orem Police said the incident happened at approximately 2:30 p.m. near 700 E. 1600 South. Dispatch received a call saying Victor Garcia was assaulting people and had a taser. The dispatcher reported hearing people screaming and crying in the background during the call.

When officers arrived, Garcia had left and run to a nearby friend’s house where he barricaded himself inside.

SWAT members and officers negotiated with the man for nearly five hours before he surrendered.

Garcia has a criminal history. He was booked into the Utah County Jail. 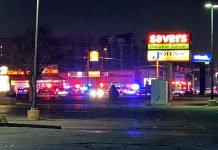 Suspect in standoff near U.S. Capitol surrenders after bomb threat