OGDEN, Utah, Feb. 4, 2019 (Gephardt Daily) — An Orem man who police say shot a man during a fight at a downtown Ogden nightclub in September 2018 has pleaded guilty to reduced charges.

The other charges were dismissed.

Dyer is scheduled for sentencing on March 13.

The cases of Gaston and Holland are still pending.

The charges relate to an incident on Sept. 2, 2018, when police responded to a call reporting a fight at the Kokomo Club, at 216 25th St. in Ogden.

According to a probable cause statement filed in Second Judicial District Court, shortly after the fight was broken up and parties were separated, three people were shot.

Officers at the scene were notified that the suspect in the shooting was Erin Tramale Gaston, aka “Big E,” and he had left the scene in a white Chrysler 300. The vehicle was seen by officers as it drove past the scene, and they stopped it in the 2300 block of Lincoln Avenue.

Gaston was a passenger in the vehicle, and DeAngelo Micko Holland was the driver of the Chrysler 300, according to the probable cause statement, which adds, “Anonymous information was later provided that a male known as ‘Monty’ was the suspect in the shooting.” It was determined that “Monty” was Frenchman Davonti Dyer.

Detectives viewed surveillance video from the Kokomo Club and another nearby bar.

The video showed the three suspects walk into the bar and assault one of the victims, who was later shot multiple times in the parking lot.

Gaston was also shown assaulting another one of the victims, while other people were fighting in the bar.

Video footage then shows the three suspects walking in the rear parking lot to a white Chrysler 300, the statement says.

Gaston is seen getting something from inside the vehicle, and he then handed the object to Dyer.

The two men then walked toward the group of victims, while DeAngelo is seen walking a different route to the same area.

All three suspects were then out of camera range, but the video showed people running, alarmed, because two people were shot in the Kokomo Club parking lot.

Dyer was seen on surveillance video raising a gun and firing three shots at a man later identified as Roberto Conde, the statement says. Conde was hit once and was transported to the hospital.

Dyer then left the area in a vehicle, while Holland drove Gaston away in the Chrysler 300. 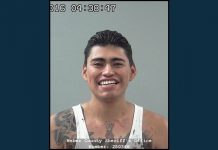 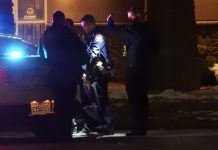