A news release from Salt Lake County DA Sim Gill said: “Jim brings years of experience to the job as he guides the Investigations Division, comprised of legal investigators, paralegals, and support staff.”

The decision to move back to the Salt Lake City area was something he gave a lot of thought to, Winder told Gephardt Daily in a phone interview, and it hinged on the fact that his wife and children have commitments in Salt Lake.

“Jim’s leadership will help the District Attorney’s Office continue to meet the needs of the community and justice system. Jim brings a wealth of knowledge and experience to the position. As Salt Lake County continues to grow and expand, we are building the infrastructure of leadership to best serve our residents.”

Winder said in a prepared statement: “I’m looking forward to the opportunity to serve and I can’t wait to get started.”

“Moab has been just wonderful to me. I can’t say enough about how well my family and I have been treated here,” he said. “The Moab Police Department is really great, and I want to work with them to make sure the transition goes smoothly.”

“My son got accepted to a school that he’s excited about,” Winder added. “He’ll be starting at Utah Military Academy next school year.”

And there’s no rush to go house hunting.

“We’ve maintained our home in Salt Lake, which we had planned to do anyway, so we have homes in both Moab and there,” he said.

In addition to being sheriff of Salt Lake County, Winder was the chief of the Unified Police Department when he announced at the end of May 2017 that he was taking the job in Moab.

The DA’s office has not announced exactly when Winder will begin the job. 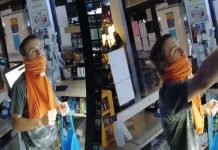