HARRISVILLE, Utah, June 23, 2019 (Gephardt Daily) — A paraglider is in serious condition after he fell between 150 and 200 feet in the Harrisville area Saturday morning.

North View Fire Marshal Ryan Barker told Gephardt Daily crews responded to a call about a paraglider whose chute had collapsed in the area of 1600 N. Washington Blvd. at approximately 10:10 a.m. Saturday.

The man was paragliding alone, Barker said, but in an area where a handful of paragliders go regularly.

The paraglider suffered injuries to his legs, back and pelvis and was transported by ground ambulance to an area hospital. His condition is serious, Barker said. A medical helicopter was called out but the decision was then made to transport the man by ground.

The man’s identity has not been released; Barker said he is in his mid-40s. 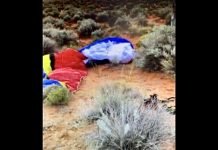