PAROWAN, Utah, Feb. 18. 2019 (Gephardt Daily) — A Parowan man has been arrested after he allegedly set up a hidden camera in the bedroom of his 17-year-old nanny; then she turned the tables on him.

The probable cause statement said officials were contacted by the 17-year-old girl on Feb. 12. She told police she was the nanny for Doubeck and his wife, and was given a room to stay in their home and payment for her services. She moved in on Feb. 3, she told officials.

“On Feb. 5, she was organizing her room and found a hidden video camera hidden under some clothing and on a child’s toy; the camera was recording,” the statement said. “The nanny viewed the stored contents of the device, and while doing so witnessed video footage of Christopher Doubek, setting up the camera and concealing it.”

There were two separate videos of him setting up the camera and concealing it, the probable cause statement said. She recorded the footage with her cell phone, then set up her laptop to record the room. She also allegedly captured one of the instances on video of Doubek setting up the camera on that laptop.

The teen went to the Parowan Police Department and showed officers the videos.

Doubek was booked into Iron County Jail with his bail set at $5,260. 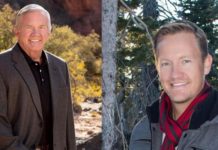