One of the vehicles, a 93 Nissan Altima rolled into a farm field ejecting the driver, identified as Delfino Morales, 30. He was pronounced dead at the scene.

A passenger in the Altima, also from Payson, was seriously injured, and was flown to the hospital by medical helicopter.

A second vehicle, a 2000 Toyota Avalon, rolled into the field but re-entered the roadway landing on its wheels. The driver, a 61-year -old Payson man, was flown to the hospital in serious condition.

It appears that seat belts were not used in either vehicle. 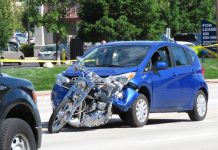