PAYSON, Utah, Feb. 20, 2020 (Gephardt Daily) — Payson police are looking for tips after a 9-year-old boy was hit and seriously injured by a truck, which then fled the scene.

“A 9-year-old boy was struck while walking on the sidewalk,” a news release from the Payson Police Department says.

“The driver of the truck did not stop, but rather fled the scene and continued east on the sidewalk, and turned south on Canyon Road.”

The child was transported to an area hospital in serious condition, the PPD statement says.

“The suspect in this case is still unknown,” the PPD statement says. “Witnesses at the location described the suspect vehicle as being a newer Chevy truck with four doors and some type of decal on the driver and passenger door.” The truck was white, an update noted.

Police are asking anyone in the area who has surveillance camera to check the recording near the time of the incident, from 4:35 to 4:50 p.m. Wednesday, for any image of the suspect vehicle.

“If you locate anything you believe is relevant to this investigation, you are encouraged to contact the Payson Police Department, 801-465-5240,” the PPD statement says.

“We would like to thank all those who stopped and rendered aid to the young man struck by the vehicle. The investigation into this case is ongoing.” 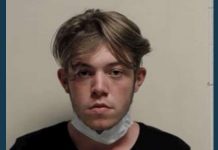