PLAIN CITY, Utah, Jan. 10, 2021 (Gephardt Daily) — Firefighters responded to a structure fire that displaced a family Sunday afternoon, and the cause of the blaze is under investigation.

Kirsten Stuart, public information officer for Plain City Fire Department, said three engines from Plain City were dispatched at about 1:30 p.m. to the area of 1400 North and 4300 West, where a single-family home was in flames.

Firefighters had to go into defensive mode to bring the fire under control, Stuart said, and they had the blaze extinguished shortly after 2:30 p.m. Crews were doing overhaul and cleanup by 4:30 p.m.

“There was structural damage only,” Stuart told Gephardt Daily. “No injuries. Everyone evacuated safely.”

She said damage to the upstairs of the home was significant, and it isn’t yet known how much damage the fire did to the basement.

“Until they can really get in there to assess the damage, it’s too soon to say whether the house is a total loss,” Stuart said.

The Red Cross was on scene to assist the family with accommodations. 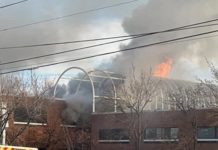 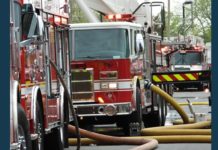