OGDEN, UTAH – August 19, 2015 (Gephardt Daily) – A pilot and his passenger had a frightening moment after their plane’s landing gear failed to open Tuesday night.

Weber Dispatch received notification from the pilot in the Ogden area around 10 p.m. that he would be attempting an emergency landing as he had tried unsuccessfully to release landing gear but was now running low on fuel forcing him to land without the gear.

Ogden Fire and Airport Crews arrived on scene as the pilot was able to land successfully without injury to himself or his passenger.

The plane has some undercarriage damage but for the most part is still intact. 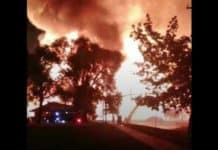 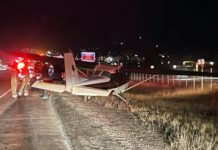 Small plane makes emergency landing on I-80 in Summit County