WEST VALLEY CITY, Utah, June 7, 2019 (Gephardt Daily) — A wanted man, who Unified Police officials called armed and dangerous after he allegedly fled an attempted traffic stop and led police on a chase, has turned himself in.

James Edward Carter, 45, has been booked into the Salt Lake County Jail system.

The probable cause statement from the Third District Court of Salt Lake County said Allred is facing charges of receiving or transferring a stolen vehicle, a second-degree felony, failure to stop or respond at the command of a police officer, a third-degree felony and possession of a controlled substance, a class A misdemeanor.

The probable cause statement said an officer located the occupied stolen vehicle, and could see a female, later identified as Allred, driving the vehicle, and a male passenger, thought to be Carter. The officer followed the vehicle while he was waiting for backing officers.

“Once officers got to his location a traffic stop was attempted and the vehicle immediately fled,” the statement said. “A short pursuit was initiated until the driver crossed into oncoming lanes. The vehicle was spiked and it was observed going into a neighborhood.”

Allred was observed running from the vehicle and was apprehended trying to hide a few houses away, the statement said.

After being read her Miranda rights, Allred admitted to driving the vehicle and knowing police were trying to conduct a traffic stop.

“Jaclyn stated she thought police wouldn’t chase her if she went into oncoming lanes,” the statement said. “Jaclyn admitted to the methamphetamine located in the vehicle as being hers.” 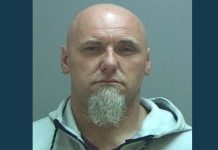