PROVO, Utah, Feb. 20, 2019 (Gephardt Daily) — Provo police arrested a man after he allegedly stabbed a homeowner with a carving fork during a burglary.

A probable cause statement from Utah County said Dametris Martin Graham, 29, who is a transient, is facing charges of first-degree felony aggravated burglary, third-degree felony aggravated assault, class A misdemeanor criminal mischief and class B misdemeanor theft. He was arrested Monday and booked into Utah County Jail with his bail set at $20,000.

The burglary was reported to the Provo Police Department Feb. 5, the probable cause statement said.

“The victim, who lives at the home in Provo, was in the basement when he heard footsteps on the main floor,” the statement said. “He grabbed a carving fork and went upstairs. He found a black male in his kitchen who was wearing all dark clothing.”

The suspect ran out the back door and the victim pursued him.

“The suspect jumped over one vinyl fence and through another as he fled the scene, damaging both fences in the process,” the statement said. “The victim caught up to the suspect and tackled him. A physical altercation ensued and the suspect grabbed the carving fork and began pushing it into the victim’s chest.”

Upon investigation of the incident it was determined that a hat, a jar full of change, and the carving fork were all allegedly stolen from the home. Collectively the items taken were valued at less than $500. The damage done to the fences is estimated at more than $500 but less than $1,500.

The suspect, while fleeing, lost his shoes, a glove, and his cell phone. A search warrant was obtained for the phone and a forensic analysis determined that the phone belonged to Graham. Graham also matches the description of the individual the victim encountered.

The suspect has a history of burglary and theft both in Utah and other states. 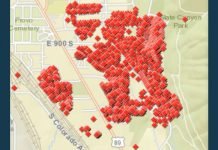 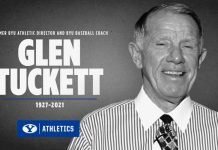