“RUNAWAY TEENS: Ellie Droge and Ocean Pulley voluntarily left Oquirrh Hills Middle School yesterday together at about 9 a.m.” said a Facebook post from Riverton City Government. “They have not been seen since. Their families are very worried about them. They have been in a relationship and are believed to be together, wherever they are. The Riverton Police Department has been closely coordinating with the families.”

Ellie is described as 5 feet 1 inch tall and 100 pounds, with light brown hair and brown eyes. She was last seen wearing a brown V-neck shirt, a cream hoodie and blue jeans. Ocean is described as 5 feet 6 and 125 pounds, with blond hair and blue eyes. He was last seen wearing a pink hoodie with a baseball-style jersey and a red Oakley baseball cap.

Anyone that sees the pair is asked to call the Riverton Police Department at 801-840-4000. 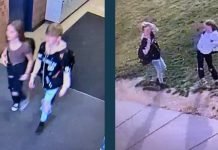