DRAPER, Utah, Feb. 6, 2017 (Gephardt Daily) — Two young children are in protective custody and two adults are facing child endangerment charges after they were found living in what police said was a “shed” at 12379 S. Relation St. (1565 East) in Draper.

According to Salt Lake County Jail booking documents, police were investigating a tip from a neighbor when officers found the children, ages 3 and 4, “asleep on makeshift beds on the floor” in living conditions described as “deplorable.”

The “small shack” was described as “filthy,” and marijuana, methamphetamine and drug paraphernalia “were found near where the children were asleep.”

Catherine Lucile Coley, 50, was with the children and was taken into custody on one count of child endangerment, a third-degree felony. She also faces drug charges for alleged possession of marijuana and methamphetamine.

Coley’s son, Benjamin Joseph Doyle, 27, also was arrested and charged with felony child endangerment. Jail documents state he slept in a separate trailer on the property, in which police found child toys and drug paraphernalia in close proximity to one another.

Police say conditions inside both the trailer and the shed were “unfit for people to live in.”

Monday night, the children’s great-grandmother, Esther Kinded, 75, told Gephardt Daily the children’s parents were going through a divorce and the mother was living in Canada.

Kinded, who lives in a house on the same property as the shed and trailer, said she frequently babysits the children and saw no signs of exposure drug use. She said the charges against her daughter and grandson were unfounded and believes the allegations were part of an ongoing domestic dispute.

Investigators indicated they were originally alerted to the situation by neighbors who claimed Coley and Doyle had used meth and marijuana in front of the children. 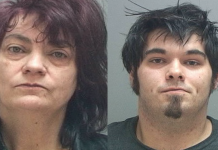