SUMMIT COUNTY, Utah, Nov. 8, 202 (Gephardt Daily) — A driver allegedly under the influence of alcohol and prescription drugs hit a child on a sidewalk in Park City Saturday afternoon.

A probable cause statement from the 3rd District Court of Summit County said Elizabeth Lynne Grambau, 36, is facing charges of:

Deputies responded to a report of a car striking a child on Pinebrook Boulevard, the statement said. Witnesses described a BMW sedan traveled onto the northbound sidewalk of Pinebrook Boulevard near Pointe Road and struck a young girl.

The driver, who was identified as Grambau, told officials she was pulling out of Pointe Road onto Pinebrook Boulevard and the girl ran in front of her in the roadway. The child sustained scrapes on her right hand, left ankle, and right foot. Witnesses told police the girl did not run out in front of the car.

“Elizabeth’s behavior was erratic and she frequently contradicted her own story,” the statement said. “Elizabeth performed field sobriety tests and was arrested for driving under the influence. A records check revealed her driver license was revoked for an alcohol offense and required an ignition interlock device.”

A records check on the vehicle revealed the license plates affixed to the vehicle belonged to the previous owner and no insurance was found.

Grambau was also allegedly under the influence of prescription drugs, the statement said. Officials did not specify the nature of the drugs.

She was transported to Summit County Jail with her bail set at $5,000. 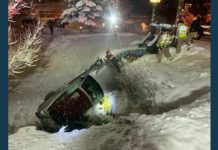