MILLCREEK, UTAH – August 24, 2015 (Gephardt Daily) – Police this morning found a vagrant sleeping inside the house where a hostage siege took place over the weekend.

The Millcreek siege came to a bloody end inside a booby-trapped home laden with reinforced barricades Saturday.

The drama continued this morning when police were called to the home around 10:15 a.m. Unified Police spokesman Detective Jared Richardson said police received a call of suspicious circumstances. “A family member of those individuals showed up to get some property and found a side window open and a chair up against it. Police were called and cleared the home and found an individual under blankets asleep in the basement. This individual has been arrested for trespassing and outstanding warrants.”

The suspect, Bradley Craig, does not have a relationship to the people who live in the home.

According to Salt Lake County Sheriff Jim Winder, the siege began around 8 a.m. Saturday with officers from Unified Police responding to reports of gunshots near 725 East 3300 South.

As officers and medical teams arrived, they found a woman with multiple gunshot wounds lying in front of the house.

Winder said the woman has been identified as a family friend who was shot while intervening in an argument between a husband and wife inside the residence.

She was rushed to Intermountain Medical Center in Murray where she is reported in extremely critical condition.

Winder said the gunman, identified as Valentin Dulla Santarromana, 37, took his wife hostage inside the home where he spoke with police negotiators by cell phone throughout much of the morning.

Negotiators say the husband became more and more and more agitated as their conversations wore on, and threatened to kill police officers as well as himself.

The standoff came to a violent end after police disabled the man’s cell phone. Sheriff Winder said SWAT team members were attempting to deliver an “alternative communications device” when the suspect opened fire with a heavy calibre weapon.

Sheriff Winder said entry ways to the home were blocked with reinforced barricades and the natural gas had been turned on in an attempt to trigger an explosion.

Winder said SWAT members inside the home did not return fire despite being shot at up to forty times.

The gunman ultimately ended up in the basement, where police say he shot his wife at least twice.

A short while later, Sheriff Winder said, the suspect gave himself up and allowed police to rescue the hostage.

She was taken to the hospital in critical condition, where she was said to be “conscious and communicative”.

The husband hostage-taker was taken into custody.

Police have made a number of domestic violence calls to the home over the course of the last few weeks. 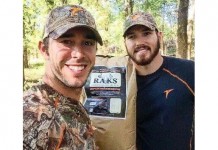 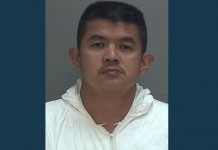