MINERSVILLE, UTAH – November 9, 2015 (Gephardt Daily) – A man who died in a collision near Minersville Thursday night has been identified.

According to Utah Highway Patrol Sgt. Todd Royce, 49-year-old Able Garcia Perez of Bloomington, Indiana, was headed eastbound on SR-21 at 6:22 p.m. when a man who was stopped at a stop sign on SR-130 pulled out in front of him.

Perez was unable to avoid the collision and hit the front left side of the truck. The truck went off the road and the Honda stopped in the middle of the intersection.

Royce said Perez was only partially restrained at the shoulder. He was transported to the hospital where he died from his injuries.

The front passenger in the Honda was also only partially restrained, and the back-seat passenger was unrestrained. Both suffered serious injuries and were transported to Beaver Valley Hospital.

The driver of the Dodge truck, also unrestrained, was transported to Valley View Medical Center in Cedar City with minor injuries. 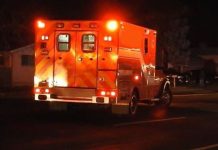