ST. GEORGE, Utah, March 24, 2020 (Gephardt Daily) — An intoxicated woman was arrested after she allegedly crawled through the luggage loading ramp at St. George Regional Airport and ran onto the runway, according to court documents.

A probable cause statement from the 5th District Court of Washington County said Sharisse Lee Knight, 33, is facing charges of:

The arresting officer responded to St. George airport Sunday just after 12:30 p.m. on a report of an intoxication, the statement said.

After speaking to witnesses and the suspect, it was established that Knight allegedly
drove her Audi A7 to the airport.

“Sharisse parked her vehicle in the designated parking lot, then entered the airport’s main terminal,” the statement said. “Sharisse was greeted by a TSA agent who asked Sharisse if she had an airplane ticket. Sharisse began swearing very loudly at (the agent). Sharisse’s vulgar language was alarming to (the agent) and all customers/employees.”

Knight told the agent that she was flying out of St. George on a private jet, therefore she did not need an airplane ticket. The agent told Knight that she needed a ticket in order to utilize their resources.

“Sharisse became even more upset and continued yelling vulgar language throughout the airport’s terminal” the statement said. “Sharisse removed her shoes and threw them in the garbage can. Sharisse then walked outside the terminal, towards a secured area that was located on the south side of the terminal.”

The agent followed Knight, while notifying St. George Police Department. Knight walked around the south side of the terminal towards a barbed wire fence and gate, the statement said. The fence and gate separated the airport’s common areas from its secured areas; namely the runway. There were signs posted on the fence and gate, informing others not to enter the runway.

The suspect then walked back inside the airport terminal, towards the luggage unloading area. She then crawled through the luggage loading ramp, which lead towards the runway, the statement said. Knight entered the runway and began running towards the parked airplane, then was stopped by airport employees.

An officer arrived on scene and placed Knight under arrest, and the suspect kicked the officer on his side. He was then able to place Knight into custody.

“Sharisse was still yelling vulgar language very loudly, along with making threats to inflict harm on all present,” the statement said. “There were multiple airport employees standing around Sharisse.”

When Knight was in the back seat of the patrol vehicle, she would only tell the officer her first name, and would not disclose her last name and birthday even after she was informed that it was a crime if she failed to do so.

She was transported to the Washington County Correctional Facility without incident with her bail set at $3,310.

The crime was committed when Knight was out on probation or parole. 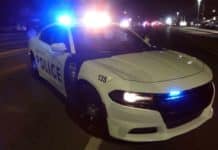