SPRINGVILLE, Utah, Dec. 14, 2020 (Gephardt Daily) — Police are investigating the shooting death of a Springville man Monday evening in what was determined to be a domestic violence incident.

A news release from the Springville Department of Public Safety said officers were dispatched at 5:15 p.m. to an apartment complex at 602 W. 550 South on an initial report of a suspicious incident.

Officers responded and secured the area. They found two girls, 17 and 18 years old, outside of the apartment.

The girls had been inside the apartment with the father of one of the girls. Officers were told the father was waving a gun around during an argument with his daughter.

At one point, the father turned to the daughter’s friend and began to argue with her.

“The daughter got between the father and her friend and there was a physical altercation between the two,” the news release said. “During the struggle between father and daughter, the gun went off, hitting the father in an unknown location of his body.”

With the father being the only person still inside the apartment, officers attempted to make contact with him, but he didn’t respond to phone calls and didn’t answer the door.

Utah County Metro SWAT was called out to assist the police, because the man was apparently barricaded in the apartment with a handgun, the news release states.

In the meantime, the 18-year-old girl was checked by Springville Ambulance for a head injury she sustained during the physical altercation. She was transported to the hospital for medical treatment.

Upon arrival of the SWAT team, it was decided to send a robot into the apartment and, through the video system on the robot, the team saw the man on the floor of the living room.

It currently is not known if the man died of a self-inflicted gunshot or if his death was the result of the gun going off during the altercation, police said.

Detectives with the Springville Police Department are at the scene and an investigation is underway.

Next of kin have been notified, the news release said, but the name of the deceased is not being released.

Gephardt Daily will update this developing story as more information is made known.

Philippines President Duterte to run against daughter in VP race 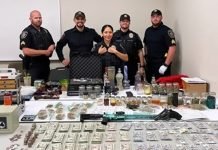