SANDY, Utah, July 8, 2018 (Gephardt Daily) — A man was killed Saturday night after being struck by a vehicle while walking across 9000 South.

Sgt. Jason Nielsen, Sandy Police Department, said the 54-year-old man was heading south on 400 East shortly before 9:30 p.m. As he crossed 9000 South, he was hit by an eastbound vehicle.

The man was transported to a local hospital in critical condition, Nielsen said, and ultimately died of his injuries.

The driver of the vehicle, a 67-year-old woman, was “being very cooperative,” Nielsen said.

The investigation was still being conducted past midnight, and multiple agencies were on scene, talking to witnesses and reconstructing the accident to determine exactly where the man was crossing the street when he was struck.

Fatal auto-ped in Sandy
1 of 8 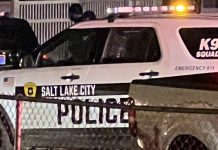