According to a statement by the Cedar City Police Department, emergency dispatchers at Cedar Communications received a 911 call reporting a deceased person in a residence at 1790 W. Harding Avenue about 4:33 p.m.

“When officers arrived on scene, they located two deceased subjects in the residence,” the statement said.

CCPD said the investigation was “active and ongoing” and that more information would be released as it became available. 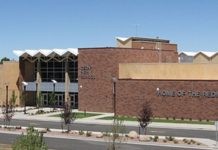