Several residents called at about 11:20 p.m. to report the sound of gunshots in the area, and just a few minutes later, police learned that a person had turned up at Jordan Valley Hospital with a gunshot wound.

“One adult male victim was in a car that was shot at,” West Valley City Police Sgt. Steve Beardshall told Gephardt Daily shortly after the incident. “His injuries are not life-threatening. He’s being treated at the hospital.”

Beardshall said the victim is cooperating with the police, but it was dark and difficult to even see who was shooting.

Anyone who may have surveillance photos or information that could help West Valley City police identify a suspect is asked to call 801-840-4000. 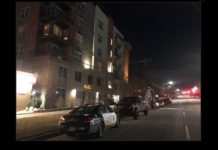