A tweet from South Davis Metro Fire just after 8 a.m. said: “Please avoid 1500 South and 860 West in Woods Cross. A train has hit a pedestrian.”

“The person was pronounced dead at the scene,” she said. “The train crew was not hurt. Union Pacific is working with the Woods Cross Police Department to determine why the person was on the tracks.”

The Police Department will provide an update on the pedestrian’s identity, she said.

A bus bridge was implemented in the area, but the scene has since been cleared, and trains are running normally.

Man killed driving into back of UTA bus in Taylorsville 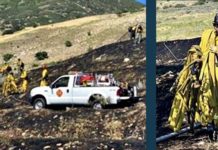