SOUTH SALT LAKE, Utah, Nov. 1, 2020 (Gephardt Daily) — South Salt Lake police have filed charges against a woman they identified as a known gang member after an alleged armed robbery that left a male victim shot in the face.

Charges were filed Friday against Breasia Maria Montano, 28, of West Valley City, in connection to the Aug. 30 incident. Montano also goes by the name “Giggles.”

According to a probable cause statement filed by the South Salt Lake Police Department, an officer responded on Aug. 30 to an apartment complex on 3196 S. Washington St., and saw two women exiting an elevator pushing a cart that held several items.

Officers then responded to the fourth floor, and found a blood trail that led to the victim, who was laying outside his apartment, and holding his face, which “was bleeding profusely,” the statement says.

Asked what happed the victim was only able to say “shot.” He was transported to an area hospital, where he told doctors Giggles had shot him, the probable cause statement says.

Neighbors told officers they had seen two women leave the victim’s apartment, and one witness said she had seen the two drive away in a Ford Mustang. One witness recognized one of the women, and showed them a Facebook profile, later identified as Montano.

The name of the other female suspect is not noted in Montano’s court documents.

The victim’s roommate told detectives that two women, one of whom he knew as Giggles, had come over and an argument began. He was on the balcony when he heard “all hell break loose,” the roommate said. He went back in and saw his roommate on the floor with a gun to his head, and one of the women demanded his phone, then ransacked the apartment, the roommate told police, according to the statement.

The victim later identified Montano as the person who shot him and took his Ford Mustang.

Post Miranda, Montano admitted to being at the victim’s apartment on Aug. 30, “and admitted ‘some stuff had gone down,’ and then she left,” the probable cause statement says.

The officer filing the probable cause statement recommended Montano be held without bail.

As of Sunday morning, she was not in custody in the Salt Lake County jail. 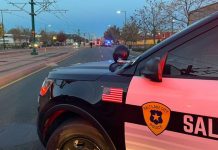