TREMONTON, Utah, Nov. 11, 2021 (Gephardt Daily) — A man was arrested on five felony charges Tuesday after police say he shared THC-laced gummy candies with his unsuspecting coworkers, who believed they being given regular candy.

“Cristian placed THC gummies into a bag with Gummy Life Savers, and then started sharing the gummies with his coworkers,” says a probable cause statement filed by an officer of the Tremonton Garland Police Department.

“The different gummies were explained as an assortment of gummy candies that Cristian had simply placed in the same bag as his Life Savers. Five of Cristian’s coworkers ate the gummies, being led to believe they were normal candy.

“All five began to experience a high, and some have been taken to receive medical treatment for adverse reactions,” the police statement says. “Cristian surreptitiously or by means of fraud, deception, or misrepresentation, caused his coworkers to unknowingly consume or receive the administration of a controlled substance, namely THC in the form of gummies.”

Cabrera was released on conditions including drug testing, electronic monitoring, avoiding contact with the victims of the alleged offense, and pretrial supervision. His bond was set at $2,500. 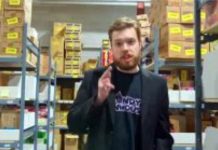