TOOELE, Utah, Oct. 6, 2020 (Gephardt Daily) — A registered sex offender has been arrested after he allegedly climbed onto the roof of a shed to peer into a Tooele family’s home.

A probable cause statement from the 3rd District Court of Tooele said Gabriel Leroy Crosby, 38, is facing charges of:

On Sunday, the arresting officer was called to an address in Tooele in reference to a man who was on top of a shed looking into the house. Upon arrival the officer located and met with the suspect, later identified as Crosby.

“Upon investigation, I learned Mr. Crosby entered onto the victim’s property two to five times in the previous year to look into the victim’s home through their windows, including tonight,” the arresting officer wrote.

Crosby told the officer that multiple times, he walked onto the victim’s property and climbed on the shed north of the residence and looked into the bathroom window. The suspect allegedly admitted he was unsure of how many times he did this or the exact dates this occurred.

The suspect also said that between the fall of 2019 and October of this year, he went onto the victim’s property and looked into another bedroom of the victim’s home and observed an adolescent.

On other dates, Crosby also stated he has looked into the victim’s bathroom window from an adjacent property.

Crosby has several previous charges of sexual abuse and has been added to the sex offender registry.

He was ordered to be released from Tooele County Jail with conditions. 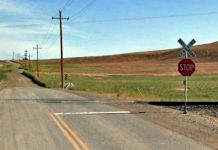