SALT LAKE CITY, Utah, June 13, 2017 (Gephardt Daily) — A man who was booked for aggravated assault after he brandished a gun and made threats outside a downtown pizza restaurant has been identified.

Officers booked Timothy Neeley, 26, into jail for aggravated assault, possession of a weapon by a restricted person and public intoxication, according to a news release from the Salt Lake City Police Department.

Police swarmed the area adjacent to the Pie Hole pizzeria near 350 S. State at approximately 2:50 a.m. before conducting a sweep of a nearby parking garage.

Multiple people were detained on different levels of the structure, some of whom were handcuffed while being questioned by police.

Witnesses on scene spoke of a fight breaking out.

While police were finishing their initial field interrogations, word spread of a man with a weapon in front of the Pie Hole.

Officers ran to the corner of Exchange Place and State Street and located a male matching the description given by witnesses. Officers also found the gun and the man was taken into custody without incident.

Nobody was injured in the incident. 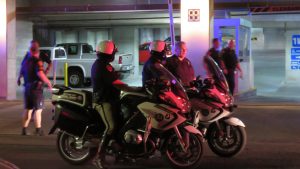