LAYTON, Utah, April 27, 2017 (Gephardt Daily) — Layton police are trying to find the driver of a white truck that crashed into an SUV then fled the scene on Wednesday afternoon at Layton Hills Mall.

According to a news release from Layton Police Department, at 3 p.m., a white truck crashed into the driver’s side of the SUV pictured above. The crash occurred west of McDonald’s at the mall. The driver of the truck fled the scene.

“The two people in the SUV only suffered minor injuries. We could sure use some help finding the white truck,” the release states.

The release says the truck is a white extended-cab Chevrolet pickup with damage to the front end. At the time of the crash, it was carrying yard debris, and may belong to a yard maintenance company. The truck may have Texas license plates containing the letters HNS.

The suspected driver is described as a Caucasian male, mid-30s, with blond curly hair. He was wearing a white shirt and white-rimmed sunglasses at the time of the crash. 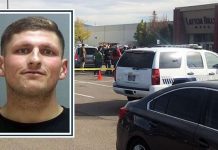 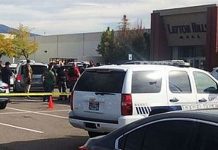