SYRACUSE, Utah, April 11, 2019 (Gephardt Daily) — A Syracuse man has been charged with 21 felonies related to sexual abuse of a minor.

Dustin Reid Hawkins, 30, was charged Thursday in 2nd District Court on suspicion of:

Hawkins is accused of the abuse of an 11-year-old boy five to six times over a period of 13 to 14 months, with the last incident occurring on April 5, the day before the child was interviewed by officers of the Syracuse Police Department.

“The boy stated that the defendant was really drunk and they were playing tag,” an indictment filed by the Davis County Attorney’s Office says.

The suspect then assaulted the child, the statement says.

“The boy said this hurt,” the indictment says. “The boy reported that the defendant told him not to tell anyone.”

On the most recent occasion, the suspect took photographs of an invasive assault, the statement says.

“The defendant was interviewed on April 7 at his home and admitted that he had sexually abused the boy on about six occasions,” the court papers say. Hawkins also confirmed the period of abuse to be over a 13 to 14 month period, and that the most recent attack was ‘a couple of days ago'” at Hawkin’s residence in Syracuse.

“The defendant told the boy not to tell anyone or the defendant would go to prison,” the indictment says. “The defendant also admitted that he took pictures of the boy during the latest incident. The defendant gave the investigator permission to look at the contents of his phone.”

The suspect also said he has viewed and downloaded pornography of young girls regularly since 2012.

“The defendant has a demonstrated sexual interest in young children (boys and girls) and is a danger to the community,” the court statement says. “Further, several of the counts with which the defendant is charged involve minimum mandatory sentencing of 25 years to life and 15 years to life.”

A warrant has been issued for Hawkins’s arrest. As of Thursday morning, he had not been booked into the Davis County Jail. 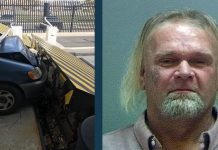