“When he activated lights, that truck fled from him on 1300 East going northbound, and my officer stopped and then followed from a distance, realized the truck was losing control and then it crashed into the parking lot here at Harmons,” Malone said.

The truck collided with a couple of structures in the parking lot of the Brickyard store at 3270 S. 1300 East well as two vehicles, he added.

“After the crash the driver of the truck fled on foot and our officer ran after him and ended up having to utilize a Taser to take him into custody,” Malone said.

The suspect will be facing charges from fleeing as well as driving a stolen truck. He was also towing a trailer containing a motorcycle and several additional items; police are working to determine if those items are stolen. 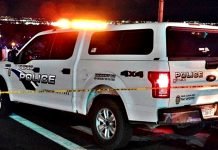 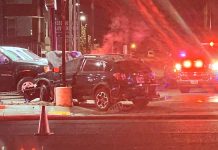